Succession, Realm, Carnival and other events 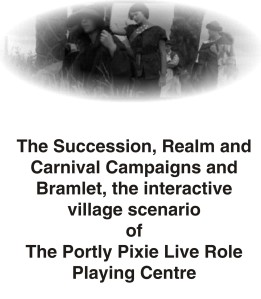 The longer we ran the Kingship campaign the more people who wanted to play it. The usual route in was to be part of the monster crew. However, no matter how well prepared they were, new players always struggled against the more experienced, more developed, characters and players. We were always struggling to find quality monster crew members who were system familiar and prepared to put up with the vagaries of interactive role playing. Then we were lucky enough to find a group of customers who came more or less together. We decided we would start again a Kingship style campaign with this group as the core players. Thus we had two campaigns running at the same time with the players in one providing the core of the monster crew of the other.

This booklet provides details of the event plots for the new Realm campaign and some other interactive events which we were establishing.

You can order this as a ‘Kindle’ download from Amazon by following this link.